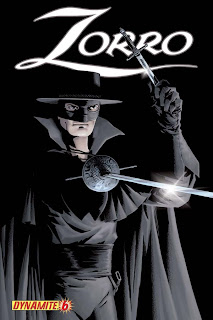 Let me start off the quick review by saying this is my favourite version of Zorro so far. I've always liked the title character, so that's not saying past versions were terrible or anything; but Matt Wagner and Francesco Francavilla sure do execute a bang-up job. Mat Wagner Grendel fame heads this Zorro ship as writer and art director, while Francavilla, a talent I admire, lays down the illustrations. The result is pulpy Zorro goodness that should please long-time Zorro fans and newcomers alike.

The story strikes me as both simple and complex in that it never gets too messy and stays on a straight path, while occasionally flashing back to when Zorro was a boy with his "milk-brother" Bernardo.

Have I mentioned this issue has pirates? The fact that Wagner fit them in seamlessly fills me with glee.

Anyhow, yeah, so the story progresses as Zorro takes on the Spanish Man and his friend narrates the story (Bernardo doesn't speak, though). We get to find out this time around just how Zorro affords to be a kick-ass rogue for justice and get further proof Francavilla is a damned fine artist. The art kind of creeps into your heart and stays there, managing to fully capture the pulpy flavour of this kind of story while managing to sweep us off our feet with dashing adventure.

That's what this title is, pretty much: dashing and daring adventure. But maybe with a little bit of modern story-telling technique thrown in. Like the Lone Ranger book, this new Zorro is a little grittier than past incarnations.

Overall, Zorro #6 delivers a great tale of adventure, coming-of-age and discovery-- and TORNADO! YAY!! The flashbacks are handled nicely, and the dialogue crisp, and the exposition none-too-heavy. A lot of story is packed into these pages. If I have to dwell on anything bad, I guess it would be that some words are used often (I assume this is intentional) and Spanish words are scattered throughout, and French in one place to indicate the character is French, I suppose. These aren't bad things, really, as people tend to say many of the same things in real life (take me, for instance) and using some non-English words to create an air of authenticity is better than those "[*translated from blah blah]" boxes, yeah?

I just can't believe we're six issue in already. Six months have gone by... seriously? Time flies when a comic is kicking some ass.


Lethality: With a flick of the wrists, masked fox-people slaughter the 5-man party with ease. The ranger manages to flee, but he's never playing the fiddle again.
Posted by Steve Saunders at 10:20 PM