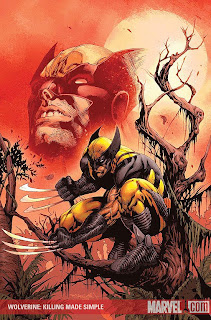 Right. So, normally I promise myself "No superhero comics, dammit-- and failing that, certainly not anything DCU or X-Men related. Think of the children!"

But goddammit, I do have my soft spots. Punisher (though we can agree he's no superhero, unless maybe you count War Journal, but I don't want to go there right now), Deadpool (please, please, please don't let Daniel Way fuck it up), some others I can't think of at the moment-- Oh, and Wolverine.

I think my Wolverine love was rekindled by Ultimate X-Men, which held me for like 60 issues before I came to my senses and dropped it. Hey, I read Ultimate Fantastic Four for 30... and everyone knows I usually hate the FF with a blind, unerring passion. Anyhow, I guess my point is: I'm not a big superhero guy. I still remember the Big Burn from the early 90's. I'll never quite forgive the universe for allowing Chris Claremont to leave Uncanny X-Men, and I'll doubly never forgive it because I got all excited when he came back to comics.

Which is yet another place I refuse to go in this post.

Yeah, I'll admit it. I saw this Wolverine one-shot (I'm assuming this is a one-shot... right?) sitting there and I said to myself "Steve, this could be it. It's got a great title, and didn't you hear some Good Things? This could be, like, the coolest Wolverine thing EVAR! And wasn't that Wolverine movie trailer SWEET? Oh, hell yes, you're buying this, homeslice!!"

Enough of this crap, I'll sum up my thoughts on the main story. Wolverine cannot be killed. He muses on this as the time-frame jumps all over the place. What's up with everyne hating linear stories these days? Damn you, Joss Whedon! See what you have done???!!! It's like "Now", "20 minutes ago", "5 minutes ago", "Last night when I was on your mom" and so on. Jesus. What pain. But... but it wasn't so bad the first few pages.

Sure, sure, it's the same old "Me Wolverine, and I can't be killed, bub", but it was sort of interesting. Then the story went... somewhere. My eyes glazed over and I mumbled something about something.

I can't be fair here folks. It just wasn't my mug adamantium tea.

At least the art was great.

Then there's another story about Wolvie finding and taking on some killer virus or something like that. I actually really enjoyed this one, but that could be because of the previous story not really impressing me. The art was keen, too, reminding me more of an indie comic, but without Logan looking retarded. It had a gritty, stark feel. Plus he had his old-school blue and yellow costume on. Win right there. Disturbing Consequences did just that: Win. It made me not kill myself for wasting my money on this comic. Also, I have two new (to me) talents to watch: writer Todd Dezago and artist Steve Kurth. And big ups to the rest of the team involved, too.

Don't get me wrong... Though I seem like I hated the main story with all of my caustic, pithy remarks, I really don't think it sucked. It's just not for me and the whole "I can't for be killed, let me tell you it" stuff really got old. In 1992.

See!? I just can't help myself. No personal insult is meant to that particular creative team, alright? It just wasn't my bag. Current X-Men readers will probably dig it. I guess.

All in all, I felt like I wasted my money. The second story was really good, though, albeit kind of standard-- but I suppose they had a theme going on with this issue. What's that? Ah, the five page Wolverine: First Class preview? Sorry, I totally skipped it.

Go here for all of the technical data.


Lethality: Oddly enough, most of the team survived. Mainly due to the radioactive radished which bit them when they were teenagers. A couple of them were cut to bits, though. Very nasty.
Posted by Steve Saunders at 9:32 PM