Now, I haven't played the video game yet-- but it seems like something up my undead & space alien loving alley. But I did manage to get a hold of this DVD and I figured "What the heck... should be worth a laugh..."

Instead of a laugh I was treated to around 1 hour and fifteen minutes of fun. More on this prequel to the Dead Space game can be found HERE. Yeah, I'm totally lazy. Live with it.

In short... Ready? Right. In short, space Scientologists get a really cool artefact from a dead world and try to take to Earth in a big spaceship, which gets overrun by these ghoulish horrible monsters that horribly take over people's bodies (and... souls?) and turn them into hideous monsters called Necromorphs.

Pretty fucking neat, in other words.


Note: Commentary on the screen cap images is below the particular image. Just so you know, aight? 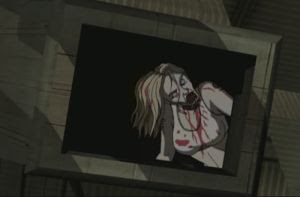 Overall, I really dug it. Despite what some naysayers said, I feel that the animation and voice-acting were quite passable, and the script written by comic book greats Jimmy Palmiotti and Justin Gray was pretty awesome. And awesomely violent. I suppose I should point out at this point that if images of graphic violence bother you-- stop reading RIGHT NOW. Thanks. I have a bunch of screen caps that aren't in any particular order and give no spoilers really. Take the one above... this was a really creepy part. Hats off to the crew for succeeding in creeping me out there. 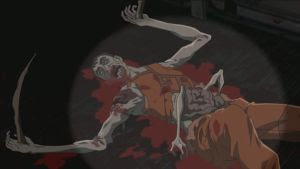 Ahh... sunbathing for the above fellow was never the same again. 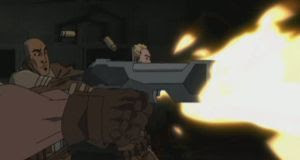 Sunbathing or not, motherfucker needs to die. 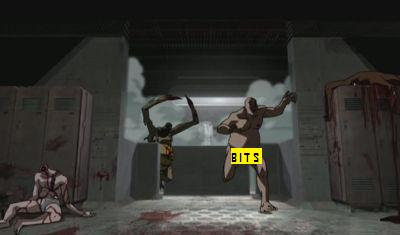 Yes, there's a shower scene! And it was quite special. I made sure to edit this shot for the families out there. You're welcome. There were some great shots in this animated film, and here's one of them. Subtle, yet incredibly effective. Door to door sales will not be tolerated. Just ask these Necromorphs. They'll tell you so. 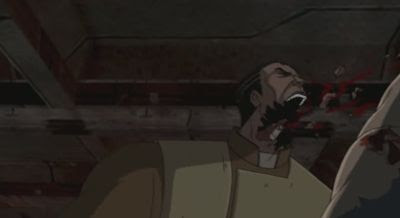 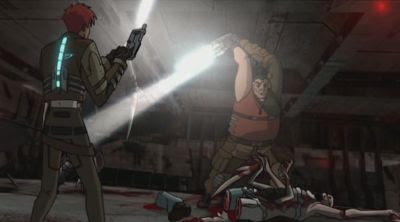 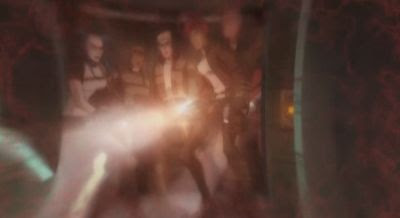 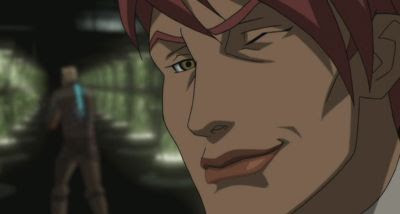 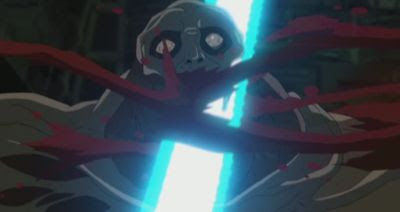 Do you SEE what those laser chainsaw thingies can do??? There has to be one available on Amazon, right? 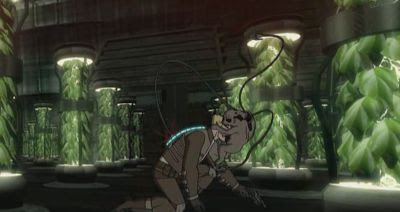 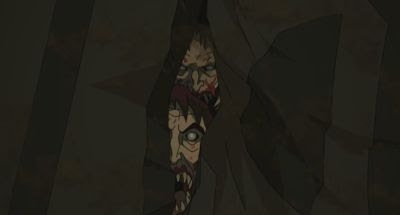 Because I simply can't help it-- HEEEEERE'S JOHNNY... and JIMMY!!! Really, this film had some seriously great moments.

Overall, it slays about 3 of the 5 party members in the group, and severely injures one other, possibly even inflicting some weeping level-loss. If you like 1) sci-fi, 2) horror and 3) gratuitous violence then 4) you'll really like this.

Verdict: Watch it. You should enjoy it.

I should read and post my thoughts of the Dead Space comic books, which bridges the gap between video game and movie.
Posted by Steve Saunders at 8:15 PM 5 comments:

...was a few rounds of Magic: The Gathering with my roommate. Of course, he totally schooled me hard, since I haven't played since I played Magic with my ex-wife about a year ago.

Quick aside: We bought Magic theme decks to play with each other so we'd have things to do and keep the marriage fresh. Jeez, thanks a whole helluva lot, Magic. But seriously, now I have a whole stack of theme decks and better company to play them with. Victory!

Anyways, the roomie and I played a few hands and I got introduced to the Planechase variation of M:tG. Sadly for my roomie, by that point I was tired of playing. Still, I look forward to tooling around with it more in the future!

Depressingly, I won one of the four games. Each time (minus the Planechase game) I played with my Coldsnap Snowscape black and blue deck, while Knoll (my roomie) played the Morningtide Battalion white and blue; Shamanism white, black and green; and Going Rogue blue and black decks. As I said, Knoll handed my ass to me-- except for the time when my magical undead minions triumphed! And it was only really due to me drawing my Rimefeather Owl... I mean, just look at this sucker:

Okay, sure, I got lucky and drew him every game... But I wasn't able to use him to any damn good effect until the third game in, where I came back from the almost-dead to take Knoll (who was at 20 hit points, mind) out in one shot. My Rimewind Taskmages and Storm Elemental helped out a lot on that furious assault, as well. So, really, aside from my one Zombie Musher, my undead minions did next-to-dick.

By the way: The Zombie Musher may one of the best cards evar...

Does he (or she) rule or what?

All in all, a fun time was had. My thanks to Knoll for taking it easy on my dense ass.

While I don't play M:tG all that often, I would love to make a super-killer-awesome undead deck. It doesn't have to be a Winner Deck, either-- I just love playing a cool deck full of dead things. Any suggestions would be greatly appreciated!
Posted by Steve Saunders at 10:43 PM No comments: 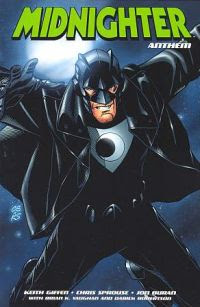 With Keith Giffen and Brian K. Vaughn writing and Chris Sprouse, Darick Robertson and others on art.

So far, so good! This gorgeously written and illustrated trade is totally recommended. Midnighter is one of the best vigilante heroes out there.


Do yourself a favour and pick this up. Action, violence and political satire that reads great! Now, back to reading... 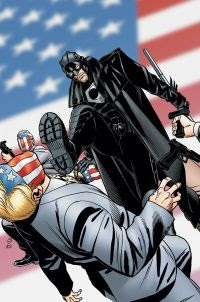 Posted by Steve Saunders at 3:39 PM No comments:

Who knows if this will be a regular feature? Who the heck knows?? But I figure I could start spewing things and maybe, just maybe you'll be entertained. Or annoyed. Maybe more of the latter.

Ognark viewed the scene before him. Carnage. Absolute carnage. Ognark thought of what he had to do to survive, he thought of his family and friends-- he thought of home. But not his home, nor his friends, nor his family could help him. No, all they would be is a carnage ridden mess if they'd been there. Ognark Thistlespoon let loose a low whistle. He was actually rather impressed with himself. Normally, it was unfortunate tavern patrons across the land of Evarmoore who would fall to his mighty blade, wielded by his mighty arms which ended in mighty fists. Normally, there would be a maiden or two left over-- bar wenches, perhaps-- who would yell things like "ra-pree-shus swine!" at him, expecting a child of The Waystes to understand any of that nonsense. But this time... this time was different. What was different? Ognark thought for a moment. Well, for one thing, the gentlemen at his feet had been killed with one of those stick things that held up a kiosk awning thing. Ognark had not expected some random fellow in the Market Plaza to be so daft-- or was it deft?-- at removing his mighty blade from his mighty fists. That fellow probably didn't expect the blade to instantly kill a near-by mule, but Ognark was digressing a bit. He was then distracted by the cobblestones and how all the blood--so much blood!-- flowed between them. The mighty bipedal mass of meat thought again. How many people had he killed? He tried counting a few times. One, two, three... fifteen, sixteen... twenty, twenty-one?-- it had to be scores. Ognark had trouble counting past the twenties, anyway. He didn't know what a score was, exactly, or how many victims that could represent, but Ognark was quite sure scores of foes littered the plaza. At this moment, the morsose silence was abrubtly shattered.

"Hoy! What is the Seven Hells has happened here? By Flurgstein's enormous balls, this is madness!! You! You there! What has transpired here?"

Ognark saw a man dressed in what he believed to be the city colours yelling to him. The man had black hair, dark eyes and lots of black facial hair. Ognark quit noticing him, because unless he was slaying him or loving him, he cared not for trivial detail.

"Trans... pired?" Ognark let the words flow slowly from his mighty jaws, "I don't think weather has much to do with this, friend."

The man screwed his face into an expression of sincere confusion. "WHAT? Who are you, sir? From where do you hail? And what manner of creature was responsible for this slaughter?"

Ognark took in a deep breath. He then spied another dead body, this one covered in pieces of various fruits. Ah, that's right, he mulled, he had killed that particular fellow with the contents of a fruit cart.

His voice now a proud growl, Ognark spoke. "I would be that port-icular manner of creature, sirrah. 'Tis me who purpose-trated this righteous fury."

The man looked ill. He seemed to be trying to catch his breath.

Ognark continued. "I pray fear you are next, for Ognark Thistlespoon of Yonder Waystes can suffer no fool... uh, fool."

"Prices, really," Ognark huffed, moving his long, jet black hair from his mighty face with a mighty hand, "Now be a nice lad and fetch me axe. It's over there... in that rather portly man's chest."

Bringing it all back...

I've always wanted to be a necromancer. You know, someone who can raise and control the dead. So, I dunno about control, per se, but I do think it's safe to state that this blog has been necro-ed. Huzzah...?

Anyhoo, expect more soon, I 'spose.
Posted by Steve Saunders at 11:51 AM No comments: