The new TPK is live! And for this time around it's hosted over at The Vorpal Gnome (a MediaGauntlet site maintained by Ryan Speck and myself).

What should you expect if you click on that pretty banner? My rambling thoughts on Houses of the Blooded, 3:16 Carnage Amongst the Stars, various other gaming things, lots of comics (Red Sonja, Lone Ranger, Doctor Who: The Forgotten, Hercules: The Thracian Wars, Pistolfist: Revolutionary Warrior, Dragon Prince, Necronomicon-- and MOAR!).

I have to be honest: Things are much more on the "ravings" side of things, as opposed to "reviews". I guess it depends on what you consider a review, but in most cases this TPK, I just blabble on, sometimes not even really talking about the product at hand critically. Just a heads up. (My natterings on the Doctor Who comic is a fine example of this!)

Also, this edition has "anchors", which means you can just click to the section you want to go from the Table of Contents at the very beginning.


Hope you enjoy this installment. I sure as Nine Hells enjoyed writing it.


All I ask of you is to read it and spread the TPK links around!

Posted by Steve Saunders at 10:06 AM No comments: 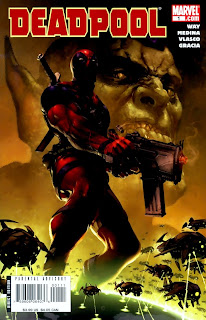 "Is this really the best plan we could come up with?"

Huh. Well, that was somewhat blandly interesting. Or interestingly bland. Or pop-tarts. The blueberry kind. Know what I mean?

Having not kept up on the "OMG! SKRULLZ!" stuff goin' on in the Marvel Universe, I might be missing out on a joke or two. But still, this issue is pretty straight forward. No surprises, decent Deadpoolian narration, great art and pretty much a meh-tastic, stock standard comic book for folks who dig comic books. It's not bad, it's not impressive-- it just is. It's also a good jumping on point (well, maybe) for new readers. Fact is, I thought writer Daniel Way was going to deliver something absolutely painful, and to be honest I kinda wish he had. See, this issue does have action, it has some Deadpool tropes and trappings we know and love, but it just doesn't... impress. It's horribly average. And I was hoping for something a little more on the stunning side, provided it didn't suck balls like I feared it would.

Scratch that. I'd rather have horribly average than averagely horrible. It's really better than I'm giving it credit for. After eating a cupcake while typing this, I realise I'm being a dick and should rate this comic a little higher. It does deserve that.

So, really, not a bad issue. In fact, I liked it. I just wish it was better. I love Deadpool, you see, and I was really enjoyed the end of that crazy run on Cable & Deadpool. But now my fave merc gets his own series again, and they gave it to a guy who is indeed very cool and nice, but the only thing I can think he did was a much hated run (ride?) on Ghost Rider. Personally, I didn't hate it all that much. I didn't like it... but I didn't dislike it either. It certainly wasn't as good, even all combined, as this first issue of the new Deadpool series.

Now, I know what you are thinking: "Screw you Steve, Deadpool is lame."

Wait, not you. Jerk.

I know what you are thinking: "Steve, as one Deadpool fan-being to another, will this issue appeal to me?"

Excellent question! And to that I have to say "Yes, but only tentatively. I think some fans will dig it, no doubt; but others will be quite cautious and will see where it goes, if anywhere, especially if it heads off to Ibiza to party. Everyone loves parties."

I fall in the latter category, in case you're wondering.

Hey, I don't care what you have to say on the matter, jerk!

Mr. Way does indeed seem to "get" Deadpool-- at least enough to write an okay first issue, anyhow. I will proudly admit that the last page is great, and classic Wade Wilson. The art is fantastic and a totally welcome sight for sore eyes...

Right, we'll pretend I didn't say that last bit. Did I really need to say it that way?

Overall, the whole issue is one great big fight scene, and it sure does look purty. As for how it's written, I can see Way has chosen the more zany aspects of Deadpool to focus on, and while that's all well and good, I sure pray he changes it up a bit or else this comic will get very, very boring very, very fast.

I do have faith, though. I think it can pulled off. I suppose it's a "wait and see" kind of thing.

No, not THAT kind of "wait and see". What's wrong with you?!

Oh, I forgot to mention Deadpool #1 is pretty fun. Fun is fun, right? And Deadpool should be fun. And funny. And Deadpooly. I like Deadpooly things.

Lethality: Of the five-man party, two return spewing wild tales of oddly clawed beasts and dire penguins equipped with steam-powered jet-packs. "But you don't know what a jet-pack is!" says the GM. And to this the adventures remind him that they had purchased a bed and breakfast in the Barrier Peaks, where they kept pet vegepygmies. In obvious anger and frustration, the GM unleashes over-zealous daemonic weightlifting instructor automatons on the survivors. Will they get out of this alive?
Posted by Steve Saunders at 9:07 PM 2 comments:

So far, so good for my birthday. I should have lots of new things to talk about, including Deadpool #1! Yeah, as much as I rail on superhero comics and all that, Deadpool is still a major weakness of mine. I just love the character. And if your curious, my favourite run of Deadpool was Joe Kelly's. Probably the best work of his career if you ask me.

In fact, I'll be reading the new Deadpool very, very soon. Maybe I can squeeze out a review before my guests show up and we feast on... something.

Until hopefully sooner than later, folks!
Posted by Steve Saunders at 5:01 PM No comments:

Heya! Don't worry, I'll be adding more stuff to this blog soon. I just needed a little break-- whilst using my Birthday Time as the perfect excuse. I'm also playing through Elder Scrolls IV: Oblivion of the first time and I'm really enjoying, though it's no Morrowind. I hope I can give my thoughts on this in the future.

For now, here's a link to a nice, short interview with late, great Bob Bledsaw (of Judges Guild-- RIP, sir), from way, way back in Pegasus #2! Yeah, it's interesting to note they made a tidy sum in sales and it's also incredibly fascinating to take a look at the mindset of indie games publishers from the early days of RPGs.


Right, so I blame to do a list of short reviews soon to catch up. Let's see if I can hold myself to that lofty goal...
Posted by Steve Saunders at 1:18 PM No comments:

Hey folks! If you don't mind, I would like to direct your attention to my latest column-thing of TOTAL PARTY KILL over at Comics Waiting Room.

This fortnight I cover some stuff like my thoughts on D&D 4e, Mutant Future (a brilliant Gamma World semi-clone, available as a free PDF), Houses of the Blooded (or rather, the $5 deal!), Twilight: 2013, some bits about Warhammer 40k: Dark Heresy and how I think it runs (so far), One Monk Miniatures (some of the best paper minis out there-- seriously! And they're giving away FREE DEEP ONES!!), Hirst Arts (they make moulds so you can make your own plaster terrain pieces), Gun Street Girl (a terrific webcomic involving a kick-ass woman and the magician she works for), Conan the Cimmerian #2, Libris Mortis and The Bonegarden as idea mines, Fate: Undiscovered Realms (a fun new Diablo-like), JESUS HATES ZOMBIES (featuring Lincoln Hates Werewolves!!), Sails of Blood (pirates!), The Harvest War over at Zuda.com (fantasy!), and a bunch of little things you'll digm like a great rpg that fits on a sheet of paper and a links to more free crap.

So, please... get to it and tell me what ye thinks!

This latest issue of CWR has lots of great stuff, including comic book reviews; a director's cut of Brandon Jerwa and Eric Tarutmann's Wide Awake: Behind the Wall of Sleep from the new Popgun 2 anthology-- which is shown on CWR in it's 9 page entirety! (and it's AWESOME); a new Jess Knows Best (geek advice column!); an interview with the creator of The Devil's Panties; and Elliott (two Ts!) Serrano showing us the future of DC Comics movies!... plus much, much more.

A very engrossing issue of Comics Waiting Room for sure. :)

(X-posted in my Livejournal!)
Posted by Steve Saunders at 11:58 AM No comments: