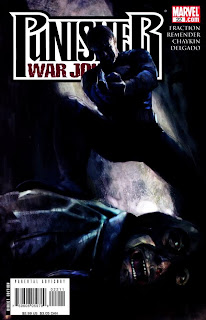 Okay, I have some other things to get done and do, so I'll try to keep this one brief.

Although I was that reviewer Marvel liked to quote for Punisher War Journal #1, the damned series lost me by #7 or something. It's not that hate Matt Fraction or anything-- he's one of the best writers out there today. I just thought PWJ started to, you know, suck. So I dropped it. Then I heard Rick Remender was coming on as co-writer. He's one of my favourites (FEAR AGENT!!!!!!111), so I started picking up PWJ again. So far, so good!

Well, with the writing anyway. The art? Freakin' terrible. I can't stand it and it makes me feel really torn about PWJ these days because the writing has gotten really, really good. Thing is, I like Howard Chaykin, too! But I guess I don't dig him as an artist on PWJ. And it's really strange how #21 looks way different than #22. What the hell...?

In a nutshell, Punisher War Journal has me reading it again, but it looks like poo. Dear Marvel, please change this, and have Chaykin write a kick ass series or something. Thanks. I am loving Jigsaw, but who wouldn't? Thanks again.


Lethality: Word spreads that the party was wiped out, but once an artist's interpretation is done, everyone realises that only three of the five died. Or was that two? Four? Are those flowers or penguins??
Posted by Steve Saunders at 6:05 PM