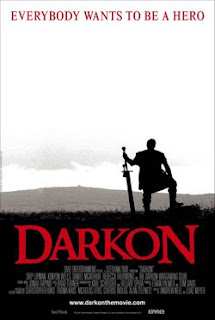 “I’ve always felt like I was kind of born out of time.”

It's about time I do a short movie review on here, so here goes.

I've heard good things about Darkon, a documentary on Live Acrion Roleplayers (LARPers) released way back in the Year of Our Lord 2006. To be honest, I expected to not like it-- even though I spent a couple years in the SCA way back when. I just envisioned this over-the-top dork-fest that would make me to be embarrassed to be a gamer.

Thankfully, the horror was not to be and I was pleasantly surprised and fascinated by this film. The premise is simple enough: The medieval-esque land of Darkon is in upheaval due to kingdoms vying to overthrow who they perceive as an evil empire. Except, Darkon is located in Baltimore, and the countries featured are just groups of people who meet up a couple times a month and dress up to battle it out and/or socialize. Sound retarded? Well, it isn't. In fact, I found it to be pretty damned cool. Sure, the people featured are classic gaming nerds, ones who wish to escape into a land of make-believe and craft some kick-ass costumes and armour in the time being.

Pretty much like any gamer, really... except they actually do it "off the table".

What's great about this movie is how it's presented. There is an overall story where the young country of Laconia seeks to challenge the hegemony of mighty Mordom. It's the fantasy LARP version of David and Goliath, actually. And it is compelling! It had me wishing there was a sequel after the exciting climatic boffer battle at the end. Interspersed with the main story are the players, who talk about their life, triumphs and a lot of woe. It's hard being a nerd, you see, and one of the primary protagonists, the fellow who leads Laconia, talks about how his family was tore up from shady sibling dealing over his late father's games empire. Talk about rough!

I could go on and on, but that would ruin this fine story for any of you who haven't seen it. The greatest strength of Darkon is how it's presented. There is no narration, only occasional explanatory words on the screen. This story is told from the view of the main characters, and it takes no sides. But if you're like me, you'll end up rooting for Laconia.

The cinematography is wonderful, with great accompanying sound to boot. Some of the people featured would make nice actors themselves and the mood in general is quite positive. It all made me wish there was a Darkon Wargaming Club here, where I live.

Get your copy and more info here.


Lethality: Throngs of screaming nerds armed with boffer swords, axes and hammers lightning bolt the living crap out of the party. No one survives... until next time. TPK in the extreme.
Posted by Steve Saunders at 7:50 PM