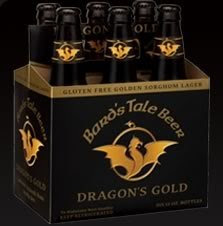 I suppose I should talk about something totally off the tracks occasionally. How about beer? Okay, huzzam!

My life is dictated by my being an obsessive geek. Like, for instance, one day I picked up this beer-stuff called Skullsplitter because 1) it was from Orkney and 2) it had a viking on it-- with an AXE. Of course I had to buy it!

And it tasted like foul dog-shit. Seriously, folks, it's not for the weak of heart. I pretended to enjoy it, but when I heard it won some sort of award, I nearly burst into flames from laughing so hard. I know good beer, and Skullsplitter is anything but "good". Maybe "interesting", or "huh!", but not "good". YMMV, as always.

Anyhow, this isn't about Skullsplitter, but talking about it sure wastes some space-- so I figured "what the hell". This post is about Bard's Tale Beer and what I thought of it.

Naturally, the name itself was the key selling point. "Bard's Tale Beer"? Instantly I thought of one of the best videogame series ever created, one that I loved so much that I included Skara Brae in more than one p&p AD&D campaign. Bard's Tale is a classic computer rpg and was hugely influential on my life.

Seeing an alcoholic libation with "Bards's Tale" in it's name, well it conjured up that acute nostalgia we all know and love, especially me. After picking it up and taking it home, I decided to look it up online to see what I got me and my wife into. Sure enough, Bard's Tale Beer's website proclaims it's totally fucking awesome (basically) and that it rules all the Beers in Beerland. It's even won some awards!

No. I didn't think of Skullsplitter. Thanks for asking.

Bard's Tale Beer's Dragon's Gold (which is the official name and classification of the six-pack I purchased) is an American Lager brewed in such a way as to not contain gluten. "100% malted gluten-free sorghum", in fact. This was an excellent point for me, as I am gluten sensitive and lately most beers have been making me feel bleh-- and as a fervent beer-drinker, this is a goddamned nightmare. I was stoked. I was looking forward to this liquid gold so that my thirst for a great lager would be quenched at last.

I drank one, and so did Sharon, my wife. It wasn't bad. It tasted to us kinda like near-beer, except it was supposed to get you drunk. All in all, it rated about 6/10 on the Taste Scale, meaning it was only marginally above average and it had a weird, but not unpleasant, flavour. It certainly wasn't anything to crow about, though, as it really doesn't taste like beer or any lager out there to me ('cept maybe some near-beers, as I've said).

But then the after-taste kicked in. The horrible, horrible after-taste. Oh, ye gawds, it's one of the worst metallic bitter after-tastes I've ever encountered in beer. At least with Skullsplitter you KNOW the after-taste is going to suck sweaty goat nads, because the primary flavour is nearly putrid. With Bard's Tale it goes from pleasantly odd to "WTF? Ick!".

Luckily, the horrific after-taste of doom didn't last long. And to be honest, it could have been worse. The sad part is that is beer is incredibly mediocre, if anything, and if it has any claim to fame it's that it tastes somewhat strange and people with gluten allergies can drink it (major bonus).

I just wish it was better. Here's to hoping it improves, and I'm willing to give 'em another try in the future. Maybe we got a bad batch? Maybe they'll come out with a stout, porter or ale which is tasty? We'll see.

For more information on Bard's Tale Beer, and if you would like to see if your local booze-slinging grocer carries it, please check 'em out here.


Lethality: The party hears the siren song of the goblin infested cave and charges in with reckless abandon. The rogue says later on, after they've returned to the Inn for after-adventure drinks, that she's impressed it was only the bard who got torn to shreds. The rest of them had some close calls, but 3 out of 4 of them had made it. Maybe next time, thinks the mad goblin king.
Posted by Steve Saunders at 11:49 PM

I dunno, I'm a pretty avid beer drinker, Rogue, Sierra Nevada, and Chimay being among my faves, and I really enjoy Dragon's Gold. It's perfect when I want something that isn't gonna fill my stomach. The odd flavor is reminiscent of a wine, and quickly fades. Now, I will say that it does NOT keep well. May have to do with the sorghum, but anything over 6-7 months and it starts going south, the aftertaste specifically. I have some right now that was bottled in February, and has absolutely no aftertaste.

Bards has a new look, and taste. check it out...