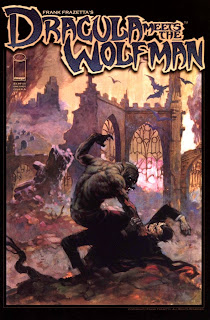 I'm tired and I had a lot of work to do on the new Total Party Kill column today (due out Tuesday on Comics Waiting Room), and so my cerebreal cortex is somewhat fried. However, I would still like to throw something up here for the day, and I can think of nothing cooler Than this Dracula Meets the Wolfman comic I picked up.

Now, straight out the gate this has two elements going for it: 1) Steve Niles, who's a competent writer and knows this material cold; 2) Francesco Fracavilla, who's one of the best artists working in the field of comics today-- and he's a personal favourite of mine (The Black Coat, Zorro). So far, so good. Throw Frazetta (!!!!) into the mix and we have a cake worth eating.

To say this comic is a masterpiece would be an outright, bald-faced lie. But that's not to say it's bad. Oh no! It's quite entertaining, in fact. This is a comic inspired by a Frazetta painting or something, and the first pages set up the face-off between Dracula and The Wolfman. And there's a woman involved. Really, there's no "meeting", unless you count deadly combat as "meeting".

Ha! Who am I fucking kidding? There's a lot of poeple who I'd like to "meet", so it's all good in the horror b-movie hood.

Francavilla is the real star here, providing some outstanding pulp-noir fight scenes that kick some serious ass. That's not to say Niles doesn't make a good showing. He sets up the brutal fighting quite nicely, and I'm very sure he came up with the story-- and it's a real hoot. Honestly, watching Wolfman and Dracula fight take me back to being a little kid, sitting there with popcorn while my dad tells me that a mummy or the Creature from the Black Lagoon should show up and pound them into paste. So, thanks goes out to the creators here for this whip-cracking hella good time.

Where does Frazetta fit into all of this? Have you seen the cover? Killer.

All in all, a fun comic. I felt that the ending was kind of jarring, what with the large time-jump happening, but it's only for three pages and then it ends. If you are an old horror movie goober like me, and like seeing stories inspired by Frazetta's remarkable and stunning art, this is for you. Money went spent for a good time.

Find out more here... if you dare!


Lethality: Three out of the five party members are decapitated, while one lost his legs. Though one got away unscathed, she'll always tremble at the sight of blood and dig a hole to hide in when the full moon is hanging in the sky.
Posted by Steve Saunders at 9:12 PM