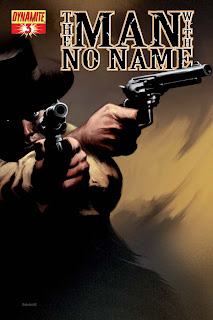 The Good, the Bad and the Uglier Sinners and Saints: Chapter Three

Honestly, I didn't feel this series got off to the start I was hoping. The first issue was okay, but it's nothing amazing. The art is good, and I like the lettering for TMWNN's speech bubbles.

TMWNN? Lame. I think I'll call him "Blondie" from here on out.

Anyhow, Blondie, who was a character immortalised by Acting Gawd Clint Eastwood in three classic films (A Fistful of Dollars -- For A Few Dollars More -- The Good, the Bad and the Ugly) is back. And he's as badass as ever. By issue #2, the story starts galloping along and I was totally hooked. It's a slow build but now in #3 things a really heating up.

It's easy to blame all the explosions. But don't. It was their upbringing, see.

The usual doublecrosses and intrigue apply, and writer Christos Gage shows why he's a talent and it's good to see him on this title. In fact, I'd love to see him write more Western titles. Or, even better, let's keep him on The Man With No Name. His story is simple (so far) and involves roguish cads from both sides of the American Civil War wanting a treasure that's holed up in a church. The characters involved are rich and well-written, with excellent period-esque dialogue that flows like a a river of the finest whiskey. In this case, simple and uncomplicated is good. It's a short read that won't let you down.

Art duties fall to one Wellington Dias, who, aside from having a goddamned awesome name, does a great job portraying the Old West, as well as the rough characters who inhabit it. Bruno Hang's colours should not be overlooked, either. The pages look rich and dark, without being too dark, and brightness comes through nicely. This is a vibrant looking title, is what I'm saying. And let's not forget Richard Isanove who's covers here usually convey a the quick violent attitude of those times.

Now, a lot of people I know talked smack about the "zombie cover" for this book, and I'll agree that it was unnecessary. But you know what? Don't let that detract you from this gritty yarn. Though, I would be totally cool with zombies showing up.

But that may just be me.

For you fellow gamer-nerds out there, I can safely say that Aces & Eights, Boot Hill and Deadlands fans will love The Man With No Name. As will you folks who enjoyed the films its based on. I'll be honest, I was rather skeptical about this series, and issue #1 didn't reinforce my hopes much. I sure love it when series like this pleasantly bushwhacks me.

Have I mention there are explosions?

Lethality: Five out of six in the posse are taken out by a combination of dynamite, pistol-fire and a couple of well-trained sharpshooters. Someone send word to their ma's. They ain't comin' home.
Posted by Steve Saunders at 11:28 AM