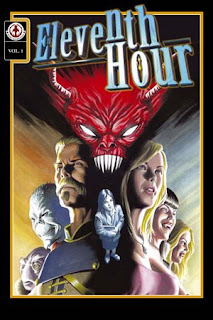 I've been meaning to give this book a proper write-up for quite some time; and now that it's available to US denizens for free from WOWIO and each of the four issues can purchased for $0.99 by the rest of the world, I figure it's about time I say something.

You need this comic anthology.

If ever there was a current example of showcasing UK indie comics talent, this is it. This project is riddled with independent can-do spirit, and marks another proud moment in British comics history. Now, me and UK comics go waaaay back. I might be a dirty Amerikaner who lives in Canadia now, but most of my friends were either German or British growing up, and that meant Captain Future and 2000 AD for a budding grognerd like myself. What fascinated me most about British comics was their ability to whip out short stories, or epic stories in parts, each with a twist; or in the case of the epic arcs, lots of twists. My favourite American comics were like this too, but they had been long supplanted by standard superhero fare (with notable exceptions like Conan and Elfquest). When I was really little, my father treated me to all sorts of sci-fi, horror and fantasy comics like Tales From the Crypt, Vault of Horror, numerous Twilight Zone-like titles and DC's G.I. Combat. Most tales were brief, and had some sort of twist or moral. This led to me discovering 2000 AD at the British Exchange right outside of the NATO base near where I spent ten years of my life. I can safely say that the UK's most popular comic and best anthology offering on the market changed my life forever.

Flash-forward to me, here, almost thirty-three years of age. I just re-read my copy of the Eleventh Hour trade paperback for the third time. Know what? I'm gonna go in for a fourth. It's worth it. It was also worth purchasing for ten bucks, even though I already had an electronic review copy. And I'll tell you this: if you don't take WOWIO up on its offer of FREE Eleventh Hour (or, 99 cents for each of the four parts should you be outside of the USA), YOU ARE MAD. And not mad in the good "Hi, I'm an Alan Moore or Grant Morrison story" way. I mean just plain brain-buggered by pale imitation of those glorious little ear-chiggers from Wrath of Khan, kids.

In a nutshell, Eleventh Hour is some good shit.

Now I will tell you why, by giving you very short takes on each story. Ready? You damn well better be...

Seniors: This about a hero and villain being stuck in the same nursing home together. It ends with a "To be continued"-- which sucks because I want more. The art reminds me of Alex Ross in a way. Loved it.

The Sweetest Thing: A terrific unconventional two-pager, and probably the most evilly charming bit of the book. Fantastic! Sometimes less is lots more.

Rise and Shine: Already another story which is the first part of more pops up. Writer Ian Sharman shows that bending it better than Bendis ain't no thang. This story is both cute and interesting, focusing on a yappy teenaged girl who has powers of some sort. I'd love to see more!

Eye of the Storm: This is the only story in this volume that I didn't completely enjoy. And it's not because of the overall concept-- I really dug that. No, it's the lack of understanding how military things work, and the need to replace "fuck" with other words which... well, reading it as "Flamin' New Guy" was somewhat lame. I thought this book was for mature readers? But my gripes are a little deeper than these. Are these American troops? I assume they are... But they don't really talk like American soldier in late '60s Vietnam. Additionally, I just wish the story flowed better and the sarge never said he was a "superior officer". However, the ending? Brilliant. Very nice. I know of a guy who makes movies about seeing dead people and plants who kill that could use a lesson or two from this writer. UPDATE: It has been explained to me that the "F-bomb" bits were edited out to make this book available to a broader audience. Makes sense to me. Disregard those particular earlier quibbles from me, please.

Danick and the Dragon: My fellow nerdcore gaming-dorks, this is a story especially for you. Hackmaster and old-school AD&D vets take notice! Seriously, you'll be wanting to deploy Ye Olde Harlot Table for this one. Easily one of the best stories of the bunch, Ian is at it again showing us dullards that he has a knack for witty writing. Big points for using "OMFG" in a fantasy story and making it work. The ending? Made of +5 Win, and I wouldn't have it any different! Go ahead and click on that image on the left there to see a very large version of the Awesome. Now off to make a Hackmaster NPC named Danick Drakesbane...


The Mist: This is a nice short which reminds me of the pulps of a bygone era. I wouldn't mind seeing more in the future starring the panther-like female lead. Nicely done.

Innocence: Schoolgirl vs. Daemons as told in narrative. Good enough not to be mere filler. The same writer penned The Mist, which is the story before this one (which I'm sure you figure out-- I hope!). She does not disappoint.

Ghost Boy: This the the manga-esque offering, artistically, and it does not fail at being interesting. "Teenage life can be so cruel" pretty much sums up this story, which is really a poem about the kind of "friendly" heartbreak many of us have suffered in our lives. Well done, well done.

The Last Days of Cydonia: Another one of my faves in this collection! I'm a total sucker for these kinds of stories. Sadly, I can't say much or else I'll ruin the ending. Trust me, it's worth the read!

Mamluk: A space adventure complete with pirates and sweet dialogue. Apparantly, this is a taste of a larger tale and a comic unto its own, which is summed up as: "Mamluk is full on military sci-fi action combined with a dramatic tale of mystery, honor and dark betrayal. So, if you like fleet battles against pirates, ground forces going tank to tank, or commando units slogging through swamps, then Mamluk is for you." Yes, I feel Mamluk is for me. Would you like to know more?

Just Married: What we done got right here is a yarn that woulda been right at home on HBO's Tales From the Crypt! A good thing, to be sure. Nuns with guns are also certainly most welcome. The ending, as usual with these kind of stories, makes it all worthwhile. It will make you want to be sure you're careful about just where you get hitched, heathens.

And that's it for the 72 pages of black & white goodness. I would also like to add that while the art is quite good on each piece, the layout and look of this volume is of the utmost professional quality. I hear Ian Sharman is to blame for this, mostly, as Eleventh Hour is his baby. Another question is, why isn't he writing more books? Dude can write fine things, my friends.

But I won't heap all the laurels on Ian. That just wouldn't be fair to the other talented individuals who contributed to this tome of classic literature. Everyone involved (yes, even the ones who did the story I complained about) deserves more shots at creating cool stuff.

So... when's the next Eleventh Hour coming out?

Find out more about what I've been babbling about here, on the Orang Utan Comics website. Should you want this in hardcopy, I think Markosia still has some available so that you might order it from your local shop.


Lethality: Total party kill. Poor bastards never had a chance.
Posted by Steve Saunders at 10:41 AM

If you liked Danick Drakesbane's tale in Volume 1, wait till you see what happens to him in Volume 2(It'll turn your knees to jelly!)

I am so expecting it to turn my knees into Ochre Jellies now!