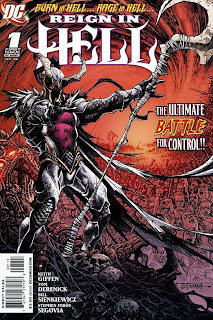 "It will be a glorious war."

As I've already said a couple times before, I'm sure, I'm not a fan of the DC Universe. I think the characters are pretty lame overall and I haven't REALLY enjoyed DCU stuff since, like, Alan Grant wrote Batman. Though high marks go out to Andy Diggle for Batman Confidential and Green Arrow: Year One. Yeah, I'm more of a Marvel guy when I have to pick between the Big Two, and I'm not that kind to their superheroes, either.

But when I saw this, my curiosity was piqued. See, I'm a sucker for anything Hell-ish. Daemons and devils and wars, oh my? Sign me up. With a title like Reign in Hell, I'm totally interested. So in the interests of my Hell-fetish and science, I picked it up.

The talent line-up stuck out to me first. Keith Giffen and Bill Sienkiewicz are on board? Nice! Gifffen can be pretty hit and miss at times, but when he's on he's ON. He's a solid writer, without a doubt. And I was pleased that Sienkiewicz was involved... until I saw the ink work. Seriously-- what the hell? I could be wrong here, but I do believe the inking looks rather rough. Unless that's Derenick's pencils doing that horrible shit? Yikes. In a way, the inking job does lend the book a 90s era indie feel, so I'll give it that. Honestly, it doesn't mess this issue up THAT bad... just a little. At least to me.

I guess "at least to me" is the operative term here. From nearly all accounts I've read and heard, Reign in Hell #1 is hated. No one seems to like it except little old me. Now, it does have it's problems. And if this were something from Moonstone or another delightful little publisher like them, it would be considered outstanding. However, this is a comic from one of the two biggest comics publishers in the known multiverse.

Regardless of some of the hiccups (what's up with that screwy lettering with those dude in The Gull? I gots a headache from that crap), I don't think this issue is all that bad. I had to do some research, which did kind of taint things for me a bit. This is indeed a DCU comic, and apparently these main characters are Z-rate Superman villains and 5th tier DCU characters. This was no problem with me. I don't know who that bloody hell these people are in the first place-- just that those demon fellas look really cool. The story is simple enough: WAR IN HELL. BRING POPCORN. And it actually reads better than a forum-based shit-fight, so I was pretty amused. The exposition gets a little tedious at times, but that just makes me think of old Thor comics, and that's not a bad thing. Eventually, characters and some folks' demonic halves are recalled to Hell in a single page of frames covering it all. Maybe this sort of jarring thing could have rated 3 pages or something, but whatever.

Later we are treated to a simple Dr. Occult story which relates to the Main Event (war in Hell, etc etc, in case you haven't been following). People complained about this, too, but I think it should appeal to Hellblazer, Dresden Files and Hellboy/BPRD fans.

Perhaps that's the problem... I cannot see how this mini-series will appeal to the standard run-of-the-mill DCU fan. I'm sure someone into DCU stuff will be interested or entertained, but most DCU fans I know absolutely despise Reign in Hell. I don't know why DC would throw together something like this and release it, but I do give them props for trying. I mean, to people like me, this is the most interesting thing to happen in the DCU since... Heck, I can't say. Azrael becoming Batman? Checkmate? Diggle doing Green Arrow*? I dunno. Something, probably.

I'm not here to bash the DCU, so I'll stop. We all know where I stand-- and even with that in mind, I'm still willing to give any comic a chance. Reign in Hell #1 is a rather fun, if somewhat average comic. I may be confused about a few things (like, who are those people with the chimp in Gotham? They look familiar... I better look into it... for SCIENCE!), but I was entertained.

And that's what counts.

I'll be checking out #2 when it comes out, and I will have no shame in doing so.
(Because I will be in disguised as Naruto.)

It just occurred to me that I really didn't tell you much about this comic. I told you how I felt and all, but what's it all about, aside from the war in Hell thing? Fortunately for you, more information can be found here! Lord Satanus and Neron are pretty hella wicked, by the way.

Yeah. I go the extra mile for you.


Lethality: The party is still smoking from all those fire attacks. The halfling looks and smells more like bacon than a rogue. Ah, now the fighter is hungry... One fatality after all!
Posted by Steve Saunders at 1:01 PM