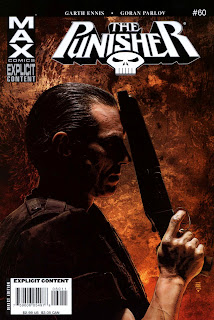 "I don't do redemption."

This is it. The last issue of Garth Ennis' Punisher MAX run. Holy hell, has it been GLORIOUS. Sixty issues of near-perfection. It's probably one of the greatest runs in comics, sadly overshadowed by the fact it isn't Superman or Spider-Man or some hip indie comic.

No, this is the motherfucking Punisher. The way he should be: hardcore. I've loved Frank Castle since the original mini-series. Sure, I was aware of The Punisher as a character before that, but I was pretty young. By the time the mini-series came out, I was ready for Frank.

And I loved him.

But Frank started getting old, and I don't mean age-wise. His tricks became pretty stale, and writers just started phoning it in with him. Then he had some story where he was an abenging angel or something. Poor Frank.

Then, like an angel himself, Garth Ennis rode in with "Welcome Back, Frank" and Punisher was good again. No, not just good-- AMAZING. Not long after, Marvel had Garth start doing the MAX titles, and one of the best comic book runs in the history of comic books was born. And now... now it ends.

We knew this day was coming. We knew Ennis would drop off at #60. We knew it would be terrific and we'd feel good, that there would be no pomp or circumstance, that Frank would just keep on goin'... and killin'. And that's how it happened.

Valley Forge, Valley Forge has been one helluva final Punisher MAX arc for Ennis and artist Goran Parlov; who, I must say, brings a very welcome Guy Davis like quality to the title. His stark, almost simple take on things really compliments Garth Ennis' solid and unflinching script. The book excerpts interspersed within the comic are pure genius and massively add to the feel, reminding me a lot of Michael Herr's Dispatches. You know, Garth Ennis should write a military history book or something. I would buy that without any hesitation.

This last Ennis issue covers many things. Justice, revenge, punishment, loyalty, debts owed, a nice twist. It's all here. And I don't want to spoil the end, but I will say it's very fitting, if somewhat anti-climactic.

Just the way it should be.

After Ennis' run wraps up, we are then treated to a preview of #61 and the fresh new team attached to the title now. Writer Gregg Hurwitz and artists Laurence Campbell and Lee Loughridge do a fine job from what I can tell, but sadly it tells us nothing more than "we can do the Punisher you know". Will they bring something cool and new to the table? Is that even possible? I'll reserve judgment until #61 hits shelves. Until then, I'll have no fear because it looks like Frank will be alright.


Lethality: Total Punishment Kill. Thanks for the goddamn outstanding run, Garth. You will be missed on this title. I hope you do some more with Frank in the future. I'll be on the hunt for more of Parlov's work as well!
Posted by Steve Saunders at 2:07 PM