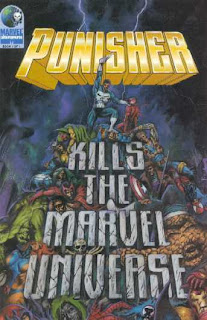 By the ancient year of 1995 CE I had grown incredibly disenfranchised with comic books in general. Mostly ones involving superheroes. I cannot tell you much about supes comics in '95 because I was too busy with work, school, and chasing women. My hair meant more to me. It was blue or something. Still, I love good 'ol Frank Castle. Sure, he'd been jerked around a bit by this point-- but at least he hadn't been turned into something like, say, an avenging angel or some bullshit like that.

No, that sort of thing was yet to come.

Garth Ennis was already a big hero to me, what with his work on Judge Dredd and Hellblazer fresh in my mind. I'd already built a super-neat altar to him in my mind. In fact, I think he was the first comics writer I truly fell for (aside from the awesome Wendy Pini, who looked much better as Red Sonja than Garth. Sorry, Mr. Ennis, it's a true fact.). Yeah, what he did with Hellblazer was pure magic, folks. And Preacher... well, I'm not sure if Preacher was on stands before Punisher Kills the Marvel Universe. They were released in the same year, if I recall correctly.

What I do remember was that this one-shot didn't really gain much attention when it was released. I came across it purely by chance while at the local shop looking for the new Hellblazer. The whole concept snagged me right away: Frank Castle is going to kill all these motherfuckers. YES. 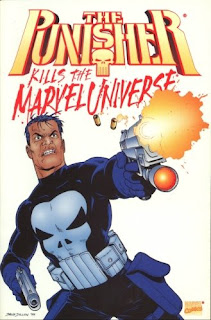 'Some of the best money I've ever spent! No, it didn't bring me back to superhero comics (I blame Mark Millar and Ultimates for making me interested again), but it sure reminded me of my deep, profound love for The Punisher and Garth Ennis (and later again with Steve Dillon, who did the cover art for the 2000 reprint-- one of my fave covers ever). At the time, I had two thoughts: 1) I sure wish Garth Ennis would write the Punisher, dammit and 2) I sure wish Garth Ennis would do a series that totally messes with superheroes. Both wishes would become true, what with Welcome Back, Frank hitting the stands 5 years later and then The Boys launching in 2006.

Anyhowitzer, let's get on point. Or some reasonably close approximation to it. The Punisher does indeed kill the Marvel Universe, and he does it a long, drawn out and brutal manner. From the point where he shows up on scene just in time to find out his family was accidentally wiped out by careless super-powered crime-fighters to the chilling, but not-very-shocking conclusion, Frank goes full tilt taking out them pesky caped convention rejects. Another thing which is interesting is how Ennis weaves daredevil into Castle's life, making him and Matt Murdock know of each other from childhood. And just how does the Punisher get all outfitted if he doesn't have criminals to, er, solicit "donations" from? Easy-- he's supported by a group of people who've been harmed and/or lost loved ones from super-powered related mishaps. That bit sound familiar? Yeah, it reminds me of The Boys a little, too. Totally a good thing, mind.

It may seem like this story shouldn't work, but it does. I feel this is mainly due to Ennis just using common sense in the matters of superhero hunting-killing. I mean, how Frank takes out Hulk? Makes sense. In fact, it makes so much sense that it reminded me why I don't read Hulk stuff all that often (save for Planet Hulk, of course). And the X-Men? Well, let's just say destructive technology finally served a noble purpose. Wolverines death was great... that is until they made him heal back from being burned to the bone in a Civil War crossover issue of Wolverine (but he'll always be killable to me, dammit). The slaying of Cap? COLD. Seriously.

I suppose I could have easily read 400 pages of Marvel heroes being murdered in various way. Hey! Don't judge me. It's an alternaverse comic thingy. It's not real. In reality most of the 616 is utterly unkillable unless they stop making marvel money; and then, ironically, it's Punisher who kills them off. But yeah, no actual marvel characters were harmed. It's all just a fantasy, a What if...

I haven't mentioned the art... so allow me a few sentences to do so. Doug Braithwaite's pencils are visceral and perfectly bring across the grim nature of this issue. I don't know why there are so many inkers. I mean, there's like sic of them. There are two colourists, as well. I find this to be interesting, and I don't know if it improves or takes away from the finished product. Regardless, the art works. It looks pretty 90's in style, but not TOO nineties, if you know what I mean. It all probably wouldn't satisfy fans as much today, but for 1995 this comic looks sweet.

This is a terrific book, no doubt about it. If you love Punisher and Garth Ennis like me, then you should dig it. If you're into seeing different takes on superhero tropes, then you should pick this up. And I have great news! Marvel is re-issuing this bad boy for you unwashed masses to consume yet again! Mark your calenders, true believers, Punisher Kills the Marvel Universe re-hits the shops come Tuesday Wednesday.

I plan to buy it, oh yes I do. I must consume the good things, you know. And after I flip through this shiny new re-release, I'll post my thoughts on it.

Would it be in bad form to say "See you next Tuesday"?
("Yes, Steve, you damned fool. This comic comes out Wednesday, NOT Tuesday. Stop the crazy drugs, man!")

Posted by Steve Saunders at 7:24 PM