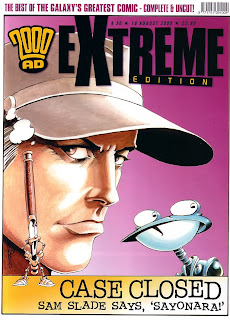 Imagine my surprise when I discovered after picking up this issue of Extreme Edition that it would be the last one. "Heartbroken" would be an extreme understatement of how I felt-- and still feel.

It would seem X30 is the last one. I've really been enjoying this collection of 2000 AD thrills that never made trades for a few months, ever since I found a shop who'd stock it. Now, I'm very sad. It is a nice consolation that Judge Dredd Magazine will now be having 64-page book bagged with it, starting with Judge Dredd: The Jock Collection.

But still! Extreme Edition... gone? I cannot be the only one who weeps, surely!

Hey, look, Down the Tubes talked about this a month ago. Sigh, I've been too busy to notice, and this usually arrives a few weeks behind for me here across the pond. I have been reading my Extreme Editions, though. And no, I don't care if The Mean Arena was featured... I loved it, anyway.

What is, or was Extreme Edition? It's old 2000 AD comics which didn't make the trade paperback cut, scanned and re-printed in all over their black & white glory. Harlem Heroes, Meltdown Man, old Tharg thrills, Judge Anderson, Invasion!... all the ol' greats in one big fat magazine-sized offering which I totally looked forward to (even if I have quite a few of the old progs). X30 has a few colour pages which is nice, and wrapping up EE is Sam Slade, the Robo Hunter. Every thrill provided in this issue showcases art by the scrotnig and unparalleled Ian Gibson, demonstrating various styles of his. And if Robo Hunter isn't enough fr a send off, we are treated to a couple Anderson: Psi Division shorts; one of which has some colour (Colin Wilson Block) and is a past fave of mine, even if the ending is kind of lacking in a way. Walter the Wobot and two Tharg strips, including the seminal The Day They Banned 2000 as the fitting closer, all add to the usual, and now silent, madness. I'm really going to miss my $7, 114 page bi-monthly Tooth fix!!

If you ever see any one of the thirty issues of Extreme Edition, do yourself a favour and pick one up-- especially if you are curious about older 2000 AD stuff. If anything, it will give you a great bang for your buck.

At least the Megazine is now offering more monthly, and there's always the weekly injection of 2000 AD. There is some good in the universe, after all.


Lethality: A mighty robo-lich king emerges from some black hell to kill party, after party, after party... But no matter how much he kills, it can never fill the hole in his heart.
Posted by Steve Saunders at 5:37 PM