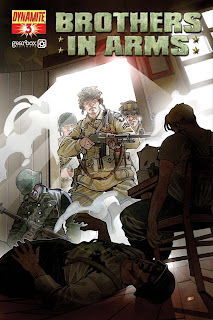 You know, to be completely and unabashedly honest I thought this series was going to suck ass. I guess mainly because it's based on a video game. Most video game adaptations either a) suck ass or b) are neither bad nor good but merely passable.

I'm happy this comic is slightly above average in storytelling and art.

Brothers in Arms is the comic book version of the squad-based tactical game series of the same name from Gearbox Software. It's pretty straight-forward: WW2, squad of GIs killing Germans. Is there more to know?

Of course there is, or else the comic wouldn't be worth reading. And this is where this book shines. It gets into the background of the characters and explains things, like how one guy got his nasty facial scars in this issue. The story in #3 is told in two sets of flashbacks, one going back to where the scarred GI got his marks and the other time-jumping a bit with the combat story. Now, there was plenty of opportunity to seriously screw the whole story up with all the jumping around, but writers Mike Neumann and David Wohl are aces in pulling it off. They took something I normally hate and feel is totally over-done and make it work.

Davide Fabbri's art is nice and refreshing, I have to admit. It has an almost cartoonish quality which captures the spirit of the time-period in such a way that I don't think I've quite seen. Like the time jumping thing, it works. The best part is the combat scenes still come across as realistic and gritty, even though the art doesn't give that impression initially. I love being pleasantly surprised like this.

As for the overall package, this comic is a quick read-- and I don't mean this in a bad way. It's just very enjoyable and the time passes quickly while you're enjoying it. The pacing and dialogue are stellar and I really can't think of anything wrong with this title so far... other than it doesn't break any new ground. It's all stuff we've seen before. It's almost so World War II cliche it hurts So don't be expecting them to re-invent the jeep or anything.

The last page is killer, too. A real knock-out, it's one of my favourite issue-closers for the year, as it made me smile with the way it wraps the story up.

If you are looking to get your WW2 on, you can't do much better right now than this title. Give it a shot if you haven't already.

Oh, and the video game? It's a bitch, but it's worth every second I've played it.

Read more on the Brothers in Arms comic here.


Lethality: The 8 Kraut squad is caught completely unawares by the Amerikaner ambush! Six of them are mowed down in a machine gun rain. One crawls away with his guts hanging out, while another escapes on the wounded horse that was hauling the ammo boxes.
Posted by Steve Saunders at 10:04 PM