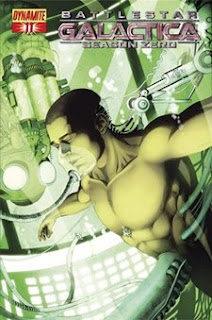 This great 12-issue series keeps trucking along at a good clip. There's really not too much to say if you haven't jumped on board BSG: Season Zero yet. Be warned: if you haven't read any of the previous issues, do so and do so as soon as possible. No self-respecting BSG fan should go without reading Brandon Jerwa's prequel to the hit TV show we all know and love.

Now, I suppose I've mentioned somewhere that a lot of cool stuff happened before BSG's 1st season, and that watching the first episodes doesn't really make it seem like the crew saw much action before the Cylon attack. Then again, some (like Starbuck for starters) are competent warriors who must have learned it somewhere. So Jerwa's story does indeed make sense and it's a perfect prequel-y fit.

As for the issue itself, Jerwa and Jackson Herbert deliver a tight,
competent package.

And Jerwa's firm grasp of plot and talky bits never wavers, nor does it fail to be entertaining. Jackson Herbert provides nice art, and his real stand-out piece for the issue is the cover he did. You can see it in this review. It's one of my favourites for the year so far. #11 as a whole sets up for the final issue of the series, which promises to be a fracking doozy.

Read more about this issue here.

Lethality: Six of the eight Cylon Raiders are blasted into space-dust. The other two have Hotdog and Apollo on their tails. Prospects are very grim for our two bio-mechanised survivors, indeed.
Posted by Steve Saunders at 5:04 PM