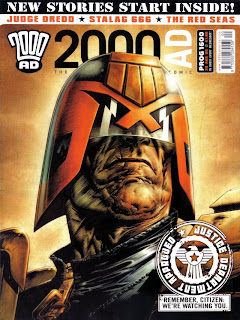 I just realised something. I haven't written a review about the actual 2000 AD comic, which is one of my absolute favourite things ever, which I look forward to weekly-- or whenever my stack of issues arrives here in Not-UKland.

Oh, and you may notice that I've started placing "[category!]" in the headers. I do this so the title is predominant, and so it's easy to see if you are interested right away. Or something like that.

Anysplrugnig, I figured that Prog 1600 was a great place to start doing the occasional 2000 AD review (more like semi-review / thoughts) right here on 'Grognerd. I'll just do a quick overview of what I think of each thrill. And if you have no idea what 2000 AD is, get your ass to Mars, punk.

First up, as per usual Tooth fare, we have Judge Dredd. This time kicking off a new series called Mutie Block. It's John Wagner and Kev Walker on point, and these guys are probably one of the best Dredd teams today (like that's a big surprise-- Wagner IS Dredd). One thing I love about Judge Dredd in recent years is that it has become deeper and deeper and tends to tackle more complex social issues in it's razor-sharp satirical manner. This time it's immigration (something I'm all too aware of personally these days!). Part one here is all set-up for what looks like an explosive story! Lotta sides and personalities involved. I can't wait to read part two!

Then there's part one to Stalag 666, which is something I've know about for quite some time. This is something writer-droid Tony Lee has had brewing for a little while, and I was terribly excited to see how it panned out. The set-up is quick, and we are filled in on what is essentially Nazi space lizards and their human suck-ups, the "Mussolinis". Hey, it's pretty transparent and heavy-handed, but I'll take this future-war scenario. And there's a reason for this, really. Stalag 666 is a WW2 POW movie as told in 2000 AD fashion. It's Stalag 17 in space and the grim dark future where there is only war. And snake Nazis. We're introduced to some interesting characters and treated with some nasty violence. All in all, I really enjoyed it! It's paced well, and made me yearn for more. Bang-up work, Lee. The artwork by Jon Davis-Hunt has a nice, older-school quality to it which has that rough feel nicely suited to this tale. Good marks all around.

Before I could stop basking in the glow of two great new stories, The Red Seas pops up! Oh, have I missed this thrill. Have I ever. Ian Edginton and Steve Yeowell are in top form, as per usual yadda yadda etc. Are those... Vikings!? Holy shit! This comic keeps getting better and better. Vikings, pirates... and George Washington? This is one of the best black and white comics you will ever read, friends. Old Gods promises to be one helluva thrill-run.

And that's it. Only three comics for this landmark issue, but damn-- what an issue. Chock full of some of the most exciting stuff I've seen in years. In fact, I have to stop yacking about this before you become terribly sick of my raving. I know I've said past issue were great before, but this prog is ACES. The fantastic Greg Staples cover is just the plutonium-enhanced icing. Well done, Tharg. Drokking well done.

Read more about this fine piece of zarjaz here. More info on the thrill mentioned can be found!