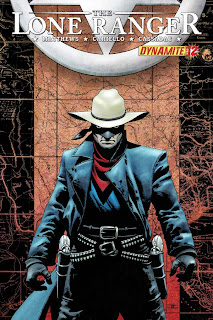 "A reminder that pulling the trigger always costs dearly."

It sure is nice to read a new Lone Ranger comic. This is one of the best western comics on the racks today, partners. I was a bit wary the the excellent steam built up over the last eleven issues was going to fade a bit. And it didn't! Arch-fiend Cavendish is back and has something up his sleeve while the Lone Ranger and Tonto sort some things out in this rather subtle set-up of an issue. In fact, I don't think there's any action at all in this-- but damn, it was still quite nice.

You see, character development means a lot to me, and all too often it tends to fall to the wayside, or get sidetracked by some pretty hookers or an inviting saloon or seven. It's normal for the first arc of a comic to have little in the way of getting into the characters heads, as the story at hand is key. But many stories out there fail to get too much into developing the main characters and especially not any secondary or tertiary (or victim) players in the overall scheme of things. The Lone Ranger as a comic manages to combat this rather effectively, mainly by not throwing too many characters at us in the first place.

For this, I want to thank writer Brett Matthews for being so damn fine at being an effective storyteller.

It should be noted this issue is a great jumping on point for new readers. And the whole silver bullet thing is explained, too. Nothing is ever over-wrought or too fancy. Most things are direct and get down to business quickly. This title manages to deliver a robust yet nuanced tale, or part of a tale, every issue and #12 is no exception.

As for the art, it works wonderfully. It reminds me of the Jonah Hex comics I read in the 80s: dark, uncomplicated, evocative and effective. That's actually a running theme with The Lone Ranger-- effectiveness; just like the title character. Anyhow, I'm really liking what Sergio Cariello is dishing out to us illustratively, especially with the backgrounds which (wait for it...) effectively compliment the scenes by relaying the stark, unforgiving nature of the American Old West. I hope this artists goes places, kicks ass and takes names.

My only complaint, if I'm to have one, is that this comic is a very fast read. 'Probably because it's told mostly in "widescreen" with light exposition. Of course, that means we can enjoy Cariello's art some more. On the positive side, this showcases the writer's main talent: subtlety. And he is quite adept at it.

After this issue wrapped up, I was already ready for the next one. #13 should prove to be exciting and violent. Just what I like. Cavendish being back guarantees some reaping and sowing and killing and pure, entertaining hell.

Get more information on The Lone Ranger #12 here.


Lethality: Bandits! Some sharpshooting whoreson rustlers have bushwhacked the party something fierce, leaving four of them pushing daises. The fifth one got away, but he's gonna have a nasty limp for the rest of his days.
Posted by Steve Saunders at 8:27 PM