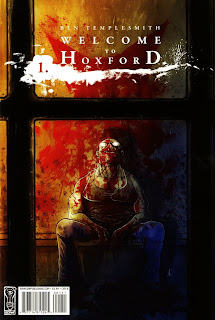 Now here's a title I've been waiting a while for. If you had asked me a few years back, I would have said I didn't really care what Ben Templesmith was up to, and that I thought his work was okay but nothing to crow over. Ask me now? Well, that evil bastard Templesmith has burrowed his way into my black heart! Mainly with great books like Fell, Wormwood: Gentleman Corpse, and 30 Days of Night: Red Snow. Dead Space sure helps, too. Yeah, Mr. Templesmith has become one of my favourite artists these last couple of years. Not only that, but he's also now one of my fave story-writers.

Welcome to Hoxford, it should be said, is NOT for the faint of heart. This first issue only hints at the madness and bloodshed to come, and it's rather shocking on its own. We're introduced to a psychotic lunatic, Ray, who has OCD associated with biting, and in short order you will accept the fact he is one fucked up individual. After brutally killing his cell-mate, Ray is transfered to a new mental/prison facility called Hoxford, which is owned and operated by a Russian conglomerate with the government's blessing. On the way there, we meet some of the life-long, can't-escape-from pals Ray is going to make in his new home. Killers, rapists, a necrophiliac, a "kiddie fiddler"?

This issue pretty much just sets things up for the convicts who are obviously on their way to a hell of some sort. By the final page you are left wondering "What's next? I have to wait until September? Oh, that's next month. Okay, then... I guess it's okay. Sort of."

I suppose the two things which come to mind right away from some reason are Alien³ and one of the best videogames created by mortal man, The Suffering. It's the whole nasty convicted criminals stuck with something bad. And I love it.

The art is the usual fare considering the artist-- and the usual fare is wildly unusual. Characters can look strange or distorted at times, even messy. but it all works. Sometimes colours are pretty solid in a single panel, washing almost everything out and other times they are lacking in a disturbing way. This is why I enjoy Ben Templesmith's work: His art is not only part of the story, it's a mood enhancer. It makes you think and feel unlike most other art. Yeah, it may take a little while to get used to; but once you do, be prepared for quite the visceral ride.

Evisceratingly visceral? Yes, I do believe this describes the art very well. You'll thank him for it, don't worry.

The story flows simply enough, kind of oozing forth as thick pitch would. Trust me when I tell you that this pitch is violently mesmerizing. There's really nothing more to it. Not yet, anyway. There will be, though. Like, how come in-mates/patients transferring out of there isn't on record?

All told, this is a fantastic first issue of what I hope is one messed up series. The mystery and apprehension is killing me! I can't wait until next month. Not just because my birthday is then, either.

Welcome to Hoxford #2 will make a nice present to myself.

Get more on this great comic here.


Lethality: The entire party is bitten to death by crazed necrophiliac gnomes. Only the halfling manages to escape quick death; and after he manages to crawl away, he got his intestines caught up on the local daycare's razor wire. A TPK of the most gruesome order!
Posted by Steve Saunders at 5:41 PM